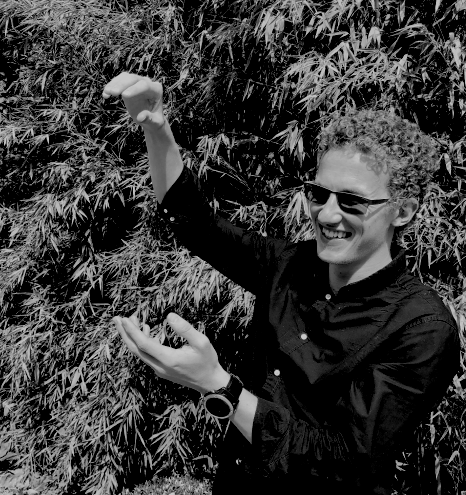 In this post I will go through a powerful Markov Chain Monte Carlo (MCMC) algorithm called Hamiltonian Monte Carlo (HMC) (MC’s be in da house) and demonstrate how to implement the algorithm within the pytorch framework.

Let us start with a super nice gif demonstrating the conservation of momentum in action:

Why is momentum important?

Well, it makes things move. It gives things the spice of life and so when we have a particle, a sample and want it to explore the space we need to make it move.
But, we want it to move efficiently around the space that we wish to explore. It turns out that this Irish guy named Hamilton, the guy behind the Hamiltonian, found a really cool way of representing such systems so that paths that explore the space efficiently naturally pop out from the representation. Hamilton showed that we can describe any mechanical system with just 2 variables, or 2 degrees of freedom , represented by position \(q\) and momentum \(p\). 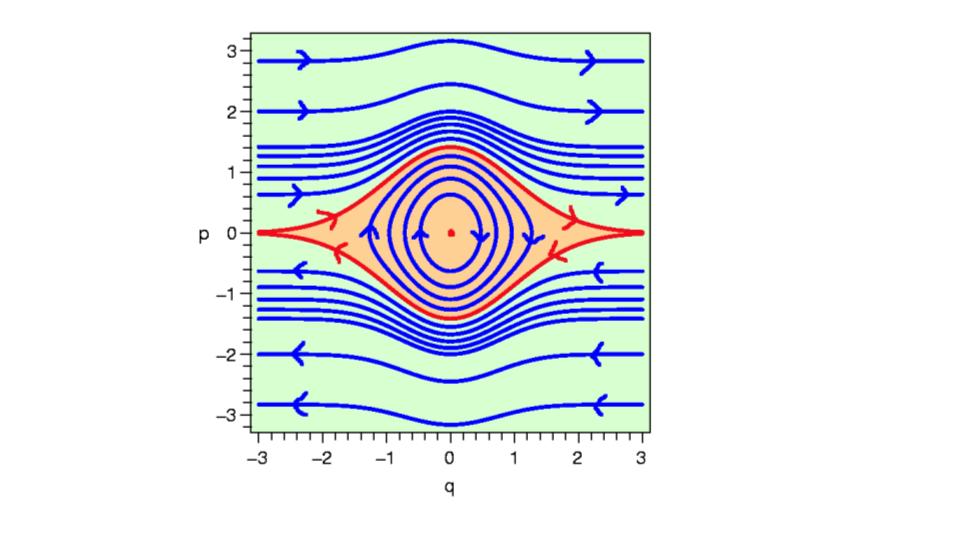 The red inner regions represent where the motion is stable, i.e, we have energy preserving trajectories. Take note of this, it is important. In fact, it is integral for why HMC works so well in high-dimensions. It relates to something called symplectic geometries, which essentially have lots of nice mathematically properties that just so happen to be the exact features we require for certain dynamical systems. #ConspiracyTheory. Because they preserve energy, we can define an MCMC strategy in which the chance of accepting a particle, sample is high, by defining the acceptance criteria in terms of the total energy on these paths!

The regions outside of this red region are non-energy preserving - this is not gouda (I know my cheeses) for our MCMC algorithm, because this would lead to low-acceptance rates, thus our algorithm would be computationally inefficient at exploring the space we are exploring! Hence, we want to construct a system that is energy preserving. #ConservationOfEnergy

Thankfully, Hamilton provided us with a way to easily find these trajectories!

The Hamiltonian of a physical system is defined completely with respect to the position \(q\) and \(p\) momentum variables and defines the total energy of the system on a particular trajectory for a given \(q\) and \(p\), the circles on the phase space diagram above.

The Hamiltonian is the Legendre transform of the Lagrangian and gives us the total energy in the system. All you need to know about the Lagrangian is that the Lagrangian was just another representation for describing the energy in dynamical systems, which itself was an extension of Newtonian formalism, it is basically a function of kinetic energy minus potential energy. It is defined as follows: \begin{equation} \label{one}\tag{1} H(q,p) = \sum_{i = 1}^{d}\dot{q}_i p_i - L(q, \dot{q}(q, p)) \end{equation} where \(d\) is the system dimensions, and so the full state space has \(2d\) dimensions (as we require 2 variables to describe the dynamics in each dimension). The \(\dot{}\) here corresponds to a derivative with respect to time, i.e \(\dot{q} = \frac{dq}{dt}\). 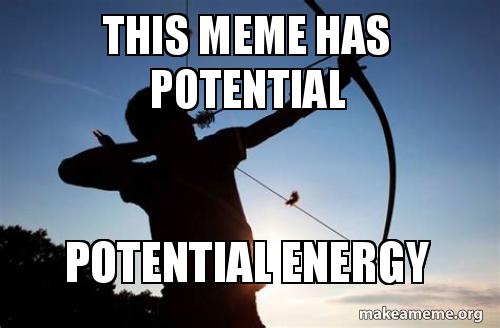 Within the HMC MCMC framework the positions, \(q\), are the variables of interest and for each position variable we have to create a fictitious momentum, \(p\). For compactness let \(z = (q,p)\). The potential energy \(U(q)\) will be the minus of the log of the probability density for the distribution of the position variables we wish to sample, plus any constant that is convenient. The kinetic energy will represents the dynamics of our variables, for which a popular form of \(K(p) = \frac{p^{T} M^{-1} p}{2}\), where \(M\) is symmetric, positive definite and typically diagonal. This form of \(K(p)\) corresponds to a minus the log probability of the zero mean Gaussian distribution with covariance matrix \(M\), more on the choice of kinetic energy later. For this choice of kinetic energy we can write the Hamiltonian equations as follows:

It should be noted that \(M\) can take on different properties, which can effect the way that we explore the space in numerous ways. More on this in another blog post, as it gets a little complicated.

where \(T = 1\) is fixed. And so we can now very easily get to our target distribution \(p(q)\), which is dependent on our choice of potential \(U(q)\), as this expression factorizes into two independent probability distributions. We characterise the posterior distribution for the model parameters using the potential energy function: \begin{equation} \tag{9} U(q) = -\log[p(q)p(q|D)] \end{equation} where \(p(q)\) is the prior distribution, and \(p(q|D)\) is the likelihood of the given data \(D\).

In order to solve the set of differential equations generated from Hamilton’s formalism we need to integrate. If the potential function (joint density in the MCMC (Bayesian) framework) is well understood, then it maybe possible to solve Hamilton’s equations analytically. However, in many instances in both the physical and statistical setting you have functions that generate integrals that are impossible to solve analytically using known techniques. A resolution to this is to employ numerical methods, which produce an approximation that is close to the true value. However, to implement a numerical solver requires us to discretize Hamilton’s equations which induces errors #Boo!

One could employ Euler’s method for solving a series of differential equations, however, it has less than desirable properties in regards to the local and global errors incurred in the approximation #OhNo. Where local error, is the error after one step and global error, is the error after simulating for some fixed time interval. A more optimal integrator is the Leapfrog integrator, that has a local error of \(\mathcal{O}(\epsilon^{2})\) and a global error of \(\mathcal{O}(\epsilon^{3})\) #Yay!.

Here is a nice figure, directly lifted from [1] Radford Neal’s paper, showing how trajectories diverge between the Euler and Leapfrog integrators. 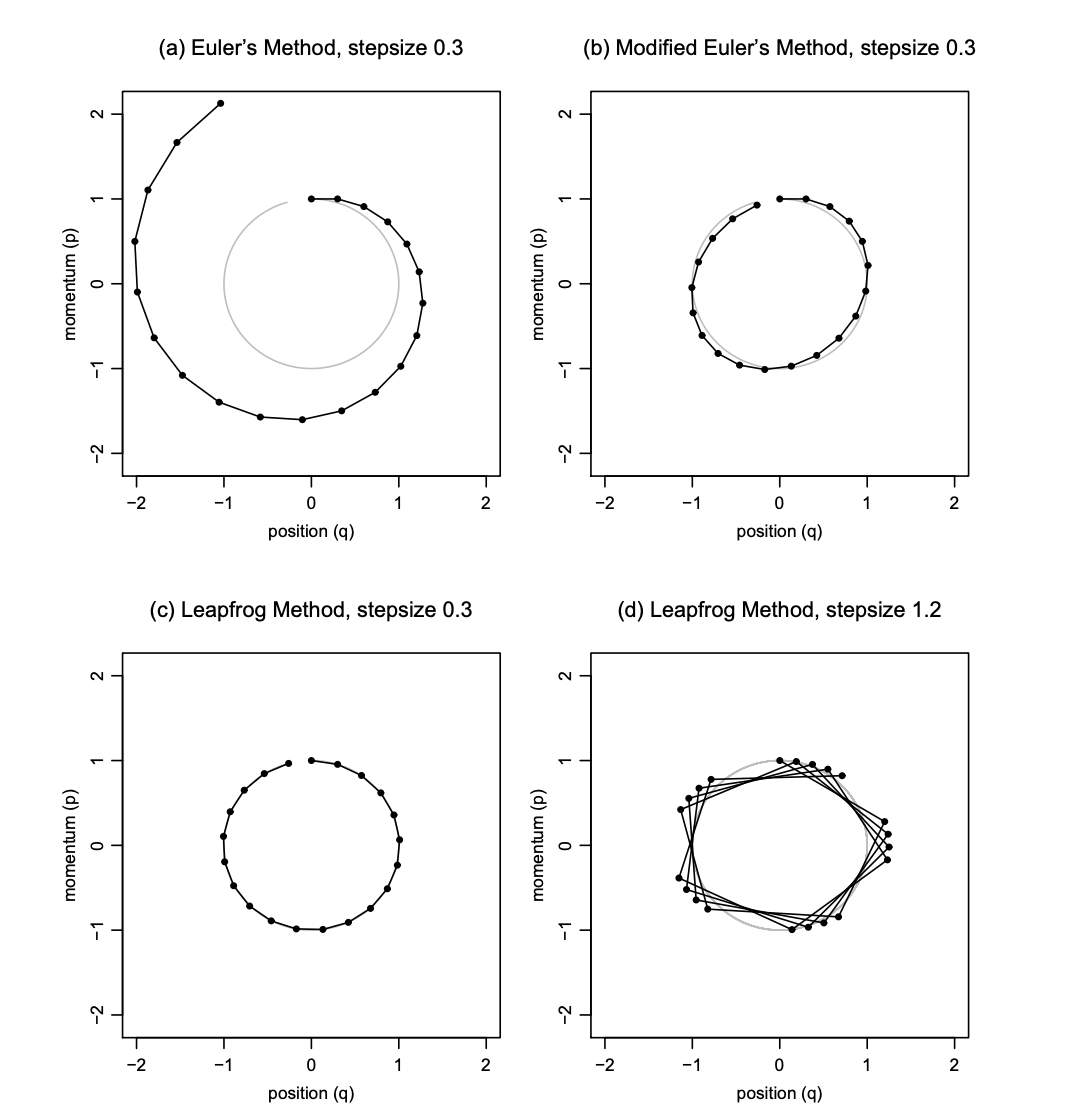 Both the Leapfrog integrator and the Euler integrator are part of a class of symplectic integrators, i.e they are volume preserving. Both could be used for HMC, but as the Leapfrog integrator has significantly lower local and global errors it has become the integrator of choice. The integrator first starts with a particle at \(t = 0\) and then evaluates the updated dynamics, subject to the form of the Hamiltonian, equation \(\eqref{hamreduced}\), at subsequent times \(t + \epsilon , \ldots, t + n\epsilon\), where \(\epsilon\) is the stepsize in which we increase our dynamical moves and \(n\) is the number of time steps to simulate the dynamics for.

Some initial points to notice

HMC can only be used to sample from continuous distributions on \(\mathbb{R}^{d}\) for which a density function can be evaluated. We must be able to compute the partial derivative of the log of the density function. The derivatives must exists at the points at which they are evaluated. HMC samples from the canonical distribution for \(q\) and \(p\). \(q\) has the distribution of interest as specified by the potential \(U(q)\). The distribution of the \(p\)’s can be chosen by us and are independent of the \(q\)’s. The \(p\) components are specified to be independent, with component \(p_{i}\) having variance \(m_{i}\). The kinetic energy \(K(p) = \sum_{i =1}^{d}\frac{p_{i}^{2}}{2m_{i}}(q(t + \epsilon))\). It should be noted that you can use different kinetic energies and these will all have varying effects, see here for more details. The standard kinetic energy actually has a direct link to the Gaussian distribution, and can be seen as average energy over all states. This is linked to the Boltzmann distribution in statistical physics, see here for more details.

So we are nearly there, it is time for the final part. Each iteration of the HMC algorithm has two steps.

In the first step, new values for the momentum variables are randomly drawn from their Gaussian distribution, independently of the current values of the position variables. For the kinetic energy, in \(d\)-dimensions, each momentum variable is independent, but only if we choose a covariance matrix \(M\) such that this is the case #ItDoesntHaveToBe. In the second step, a Metropolis update is performed, using Hamiltonian dynamics to propose a new state. Starting with the current state, \((q, p)\), Hamiltonian dynamics is simulated for \(L\) steps using the Leapfrog method (or some other reversible method that preserves volume), with a stepsize of \(\epsilon\). Here, \(L\) and \(\epsilon\) are parameters of the algorithm, which need to be tuned to obtain good performance, see here for details on tuning. The momentum variables at the end of this \(L\)-step trajectory are then negated, giving a proposed state \((q^∗, p^∗)\). This proposed state is accepted as the next state of the Markov chain with probability: \begin{equation} \min[1, \exp(−H(q^∗, p^∗) + H(q, p)] = \min[1, exp(−U(q^*) + U(q) − K(p^∗) + K(p))] \end{equation}

Here is an awesome visual of HMC in action from chi-feng’s github page:

The Hamiltonian Monte Carlo algorithm starts at a specified initial set of parameters \(q\), see code below. Then, for a given number of iterations, a new momentum vector is sampled and the current value of the parameter \(q\) is updated using the leapfrog integrator with discretization time \(\epsilon\) and number of steps \(L\) according to the Hamiltonian dynamics. Then a Metropolis acceptance step is applied, and a decision is made whether to update to the new state \((q^∗,p^*)\) or keep the existing state, see code below.

How to Implement HMC in a System

I’m going slightly exaggerate some aspects of the code, so that it is clear how one can implement HMC more generally and if needed, for research purposes, add your own HMC flavor. Disclaimer: This code is not optimised for speed, it is here for readability and clarity. I should also note, that once Pytorch 0.4 has been released, all Variable statements can be replaced with torch.tensor(data=...) and if you want the gradients of those objects, then you do torch.tensor(data=... , dtype=..., requires_grad=True) We are going to use a helper function for now called VariableCast(), for Pytorch v0.3 and lower, which handles this automatically:

Step 1 Automatically calculating the gradients for an arbitrary function might sound difficult, but with any auto differentiation framework this is actually quite trivial. In Pytorch we can do the following:

The canonical papers are: